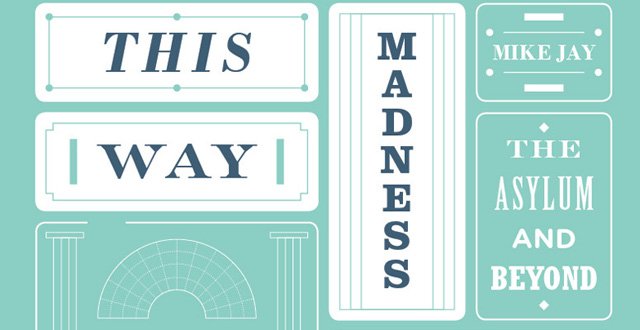 The text is broken into four arbitrary sections:  (1) The Madhouse 18th century; (2) The Lunatic Asylum 19th century; (3) The Mental Hospital 20th century; and (4) Beyond the Asylum 21st century.

The book is 255 pages long, has a brief two-page index, three pages of sources and further reading and more than 600 rarely seen photographs from the amazing Wellcome Collection.

Madness has been a part of every culture across the globe since the dawn of humanity. Bethlem in London and Geel in Belgium of the 13th century were viewed as places of refuge. The asylum was seen as a safe place in which to go mad. No psychiatric disorder can be diagnosed by a blood test. But DNA analyses, aided by family history can follow familial conditions, for example, manic depressive (or bipolar) disorders. Causality in medieval England of mental illness was attributed to possession by demons, imbalance of bodily humours and to phases of the moon, hence lunacy. Today as several mental illnesses are thought to be caused by chemical disorders of the brain, there are no chemical measurements to substantiate the association.

As early as the 13th century it was recognised in British law that madness excused responsibility in certain contexts. The law made a distinction between ‘natural fools’ (congenital disorders) and those suffering from madness, which might be periodic or temporary. The term ‘insanity’ is first recorded in a legal source:  ‘Mad folke and lunaticke persons.’ Melancholia (depression) was said to be associated with black bile, a humoral imbalance.

The Bethlem Madhouse was built in 1676, a big beautiful building with no foundations, eventually crumbling becoming dark, dank and inhospitable. It was described as a façade of care concealing a black hole of neglect. Patients were subjected to ‘stone’ extraction from their heads, bloodletting of ‘humours’, cupping, induced emesis, blistering, purging and other tortures. Public visits of curiosity and voyeurism were allowed. In 1751 a London physician, William Battie, established nearby a rival hospital, St Luke’s Hospital for Lunatics. St Luke’s barred many of Bethlem’s ‘treatments’ and became a teaching hospital for ‘mad-doctoring’.  Battie recognised ‘original’ (congenital) madness and ‘consequential’ madness. William Hogarth deemed madness an affliction of the soul.

King Geoge III takes the stage for two reasons. Firstly, his attempted assassin was tried and confined as a criminal lunatic. Secondly, his condition (thought to be porphyria) was brutally treated. I have heard, at a recent history meeting, that George III suffered from biliary colic and manic-depressive disorder, not porphyria. Who knows? The history of psychiatry is a touch sordid and savage. Jay focuses mainly on English and French institutions. In 1793, the Salpetriere Hospital freed inmate patients from chains and shackles. The 19th century was also notable for the false ‘sciences’ of physiognomy and phrenology. The former studied facial features, the latter skull shapes. There are wonderful illustrations of phrenological physicians.

The early 11th century saw the emergence of the lunatic asylum where inpatients were chained, beaten and generally neglected. John Perceval said presciently: “The greatest part of the violence that occurs in lunatic asylums is to be attributed to the conduct of those who are dealing with the disease.” Straightjackets and neglect became epidemic. In the mid-century the notions of a therapeutic institution were mooted and music therapy, workshops and classes initiated. John Connolly expounded two words – kindness and occupation. Incidentally, the term psychiatry came into use in 1808. Melancholia and neuroasthenia were common. Rest cures, hydrotherapy and rehabilitation were recommended for “nervous exhaustion”.

And so to the mental hospital of the 20th century, which dropped the term ‘asylum’.  Cretinism, pellagra, delirium tremens, and syphilis became recognised as medical causes of madness. The UK’s Mental Treatment Act recognised the (a) the certified insane; (b) the temporary insane; and (c) the voluntary insane. World War I brought hordes of “shell shocked” troops with psychological and emotional dysfunction. Bethlem was moved to a more convivial rural location and merged with the Maudsley Hospital. Frontal lobotomy became popular in the 1930s, followed by ECT from the 1940s, then compulsory sterilisations for the mentally ill. The first pharmacotherapy breakthrough came in 1950, with chlorpromazine for psychosis, followed by meprobamate for anxiety, and later diazepam and lithium. And the rest is history – pharmacotherapy reigns supreme supported by cognitive behavioural therapy (CBT), group therapy, support groups, art and drama therapy and mindfulness, etc.

Joy includes an array of paintings, drawing, art work, and sculpture by psychiatric patients, which are a source of bewilderment to me. The book is replete with illustrations, diagrams, ads, photographs, maps and architectural graphs. A book to browse and peruse, to admire its layout and content.

A book to recommend to all in or around psychiatry, not so much for the text but for its illustrated content. A joy to hold and behold.