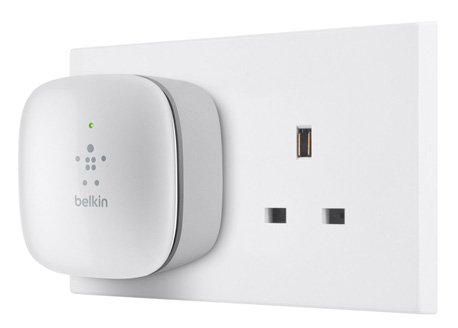 With the Belkin wi-fi Range Extender, you can expand your home network’s wireless connection up to an additional 5,000sqft.

Almost everything gets an upgrade in the Surface Pro 4, starting with the display, which jumps from 12 to 12.3 inches in size — without making the device larger. Rather, Microsoft decreased the bezel around the Surface’s screen, adding more ‘real estate’. The Pro 4’s PixelSense touchscreen is only 400 microns thick and is protected with Corning Gorilla Glass 4 (the Pro 3 has Gorilla Glass 3), producing what Microsoft says is the thinnest optical stack-up anyone can possibly ship.

Both devices have nearly identical ports: A USB 3.0 port, a microSD card slot, and a Mini Display port.

But it is not only the body of the tablet that got an upgrade. New Surface type-covers will work with the Surface Pro 4 and Pro 3. These are the lightest and thinnest type covers Microsoft has ever made, with an integrated, backlit keyboard, softer key mechanics that make them quieter, and increased travel between keys. They also have a fingerprint reader for added security and come in five colours.

Don’t forget one of the marquee features of the Surface Pro line-up: the Surface Pen. The new Surface Pen, which works with the Pro 3 and Pro 4, has an eraser on the end of it and the battery lasts all year long, so no charging; just replace the battery when it dies.

The Surface Pro 3 and Surface Pro 4 can plug into the Surface Dock via USB — a hub that has four USB 3.0 ports and two ports for 4K displays, plus an Ethernet port for sharing screens and files between devices, as well as multitasking on larger monitors.

The base configuration of a new Surface Pro 4 starts at € 1,029.00 including VAT, and comes with an Intel Core m3 chipset, 4GB of RAM, and 128GB of internal storage, although a Core i7 with 16GB of RAM and a 1TB hard drive will set you back € 2,499, including VAT. Microsoft is accepting pre-orders now and devices ship on October 26.

for current pricing and specs or email darach@maxamise.ie for more information.