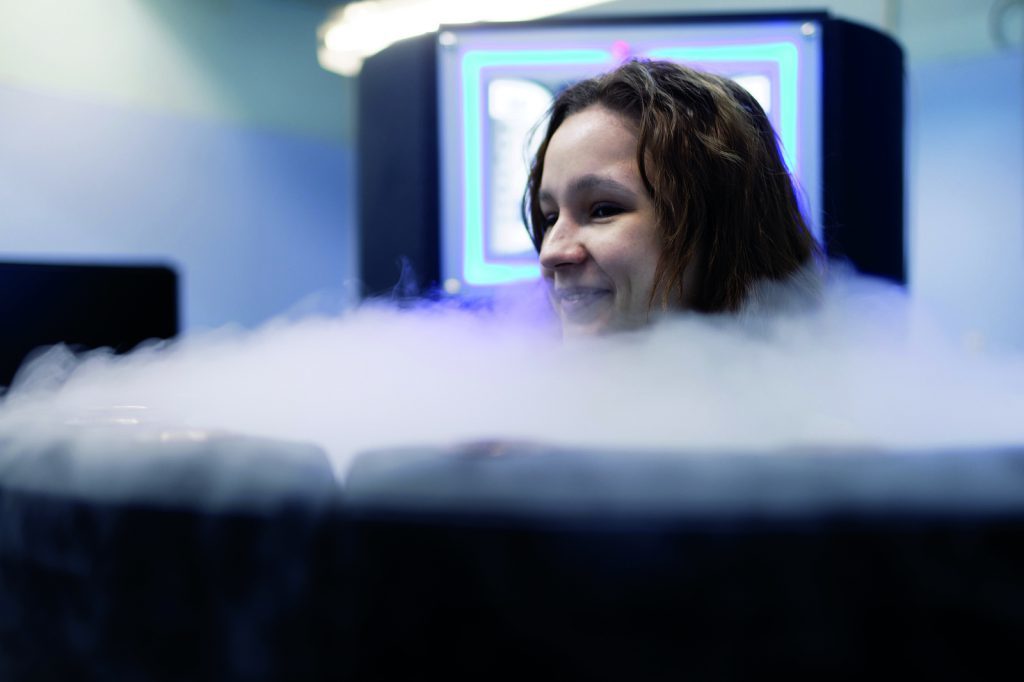 Sports scientists and physiologists have routinely pushed the boundaries of science within elite sport by implementing various innovative approaches, with many practices subsequently filtered down to the general population. The use of local cryotherapy (specifically ice packs and cold-water therapy) is perhaps the most utilised intervention in both elite and amateur sporting settings.

Whole-body cryotherapy (WBC) and partial-body cryotherapy (PBC), however, represent an extreme approach to cryotherapy and have become a popular recovery strategy in elite sport settings, with many WBC/PBC providers making themselves more readily available for public use.

Although WBC was proposed over 30 years ago for use as a treatment for many inflammatory diseases, it is only recently that research in cold air exposure has grown. Typically utilised within 24 hours of exercise completion, WBC/PBC is a strategy consisting of exposure to extremely cold air, that is maintained at -110°C to -140°C for two minutes, in temperature-controlled spaces wearing minimal clothing.

In PBC, the user’s head sits outside a nitrogen-filled sauna (see Image 1), compared to WBC, which involves the head also being exposed to the cold stimulus, typically via a walk-in cryochamber.

User preference has led to many PBC saunas replacing traditional WBC chambers, yet a 2013 study in PLOS ONE reports WBC as more efficient in cellular activation and nerve function as a result of its use. Also of interest for readers, it is important to note that although WBC/PBC is considered similar to an ice bath, the mechanisms and response differ. Ice baths target local muscle temperature, while WBC/PBC initiates a biochemical change that goes beyond an acute muscle response.

Research examining WBC/PBC implementation in both sporting and public settings is growing, yet when considering the vast application of its use, it is surprising how little we actually know about this therapeutic method. Currently in the UK, an increasing number of users employ WBC/PBC each year to soothe aching muscles, treat arthritic symptoms and lose weight. Treatments typically cost £30-to-60 per session, with users often signing up for multiple doses of sub-zero air per week.

The limited scientific evidence available reports WBC/PBC being of benefit due to the exposure to cold air initiating a process of blood rushing to the core, whereby a collection of typically dormant enzymes improve health, wellbeing and performance. It is understood that as blood rushes to the core, toxins are flushed from peripheral tissues and blood is enriched with oxygen, enzymes and nutrients, with the body activating all of its natural healing abilities as a result. Going further, one WBC/PBC provider describes a release of adrenaline, relieving pain and generating a feeling of exhilaration as a result of its use.

However, perhaps most importantly, a recent report by the US Food and Drug Administration (FDA) noted no evidence to support WBC/PBC for treatment of illnesses such as rheumatoid arthritis or multiple sclerosis. The FDA went further to state that WBC/PBC used in public spas have not been “cleared or approved by the agency in support of these claims”.

So what does the science say? A study in the Scandinavian Journal of Medicine and Science in Sports reported no beneficial effect of WBC use on maximal muscle strength (maximal voluntary isometric contraction of knee extensors) post-repeated eccentric contractions. Evidence for the use of WBC to improve muscle soreness post-exercise has, however, been reported, despite no evidence for functional recovery. More recently, a 2015 study in the Cochrane Database of Systematic Reviews noted insufficient evidence to support WBC use to dampen muscle soreness post-exercise in elite athletes, yet this view of greater reductions in tissue temperature associated with WBC was recently disputed by a study in Medicine and Science in Sports and Exercise, which showed cold water immersion to produce greater reductions in blood flow and tissue temperature. Mixed support for WBC/PBC influence continues when examining both body composition and gender. Higher body fats were reported to correlate with greater skin temperature change following WBC/PBC use in males, while females (who typically carry more body fat) experience greater skin temperature change post-treatment than males.

Specifically regarding the time-course of recovery, a study in PLOS ONE noted enhanced muscular recovery via WBC through its use in restricting the inflammatory process post-exercise. These findings suggest that multiple interactions between cells are likely to be involved in the physiological response to fatigue, and cold may serve to limit the severity of the inflammatory response. In this case, multiple WBC exposures can enhance recovery by decreasing the acute-phase inflammatory response after a running trial exercise, thus contributing to its beneficial role in organ protection after muscle damage. In terms of practical applications, data confirms that the treatment induces an anti-inflammatory protection effect, and suggests that WBC reduces the time of recovery via positively affecting immunological parameters and the regeneration process.

In elite sport, the use of WBC/PBC has gained praise as a method to improve musculoskeletal trauma post-exercise. Both a positive bone-forming effect and a positive hormonal change have been identified as a result of WBC use in national team rugby union players post-training days.

In contrast, however, another study in PLOS ONE noted no physiological changes in core temperature despite WBC use post-competitive rugby league fixtures. Within non-contact sport, decreased muscle damage (creatine kinase response) was reported as a result of WBC use, while tolerance to training load by preserving sleep was noted during a period of intense training prior to the London 2012 Olympic Games.

In the general population, WBC/PBC has been administered to hasten post-exercise time course of recovery and improve general physical and mental health, with one literary review article in Frontiers in Physiology 2017 reporting a batch of 30 consecutive sessions optimal for effectiveness. In the recent literature review, it was summated that WBC use decreases the hormones typically associated with stress and increases testosterone, a typical anabolic hormone.

In addition to scientific evidence supporting its use, increased frequency of anecdotal support and celebrity endorsements of WBC/PBC has furthered the interest in this form of health treatment, with many users now utilising WBC/PBC regularly for non-sport performance-related benefits. To date, no scientific evidence has been presented to support the notion that WBC/PBC positively influences non-sport performance-related benefits such as healthier skin, yet, according to one provider, treatments supposedly rejuvenate the collagen matrix, while also reducing the appearance of cellulite and fatty deposits at the skin’s surface.

Another recent rationale for use that has been scientifically reported is the influence of WBC/PBC upon improving mental health. However, the small scale and poor control of such studies somewhat discounts this notion of acute psychological change as a result of WBC/PBC.

Despite both positive and negative evidence existing for the use of WBC/PBC, current research does not inform us as to whether WBC/PBC works in an empirical sense and conflicting evidence to support its use exists, with the mechanisms that underlie WBC’s potential benefits also currently unknown. It is, however, important for readers to note that despite poor evidence for the use of WBC/PBC, anecdotal evidence potentially employing the power of the placebo should be considered of importance.

Recent clever marketing seen within the advertising of WBC/PBC has been a driver in increasing public use of WBC/PBC, yet many users do not understand the mechanisms of effect associated with this treatment, nor any potential harm that both short- and long-term use of WBC/PBC is likely to have.

In addition to a lack of understanding surrounding long-term use, no longitudinal studies have been conducted upon WBC/PBC use and its benefit upon both the marginal gains desired by elite sport users and the health effects promoted to public users are yet to be properly investigated.

Also of note for readers is that limited research is present to assess its use on women and children, who (due to their morphological and physiological differences) are perhaps likely to experience differing mechanisms of effect.

As a result of the evidence presented above, WBC/PBC application to many sport, exercise and health settings needs to be carefully considered prior to implementation. Users need to be made aware of the safety issues surrounding long-term use, with recent deaths in America and frostbite evidence made public by users adding to the concern over WBC/PBC use.

The yet to be discovered mechanisms of WBC/PBC and the suspected risks and high cost associated with its use mean that caution is advised before committing one’s self to this treatment protocol. To date, no risks of long-term WBC/PBC use have been identified, yet as evidenced in this article, a need for future research into WBC/PBC use in sport and exercise exists, when considering that much of the rationale for implementation of WBC/PBC surrounds anecdotal evidence presented from athletes, with a lack of structured WBC/PBC research protocol existing among other population groups.

Until we can fully understand what is happening during cooling of the entire body (including or not including the head) and the risks and benefits of WBC/PBC are unearthed, the plausibility of WBC/PBC use will always be questioned.