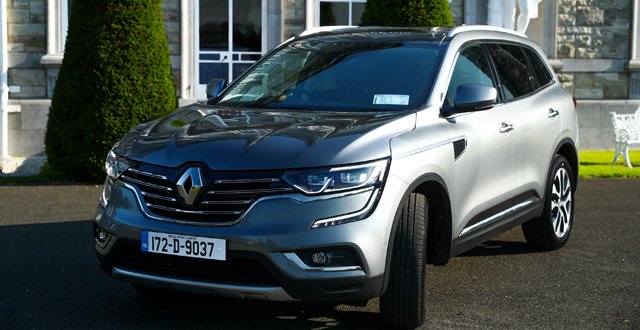 On the back of Renault’s striking success with their Captur and Kadjar crossover models, the French marque has ventured further down the SUV route with their premium level Koleos. Renault clearly have their sights firmly set on a more upmarket buyer as this car is festooned with premium quality perks, especially in the higher spec Signature Nav variant.

The Koleos is strikingly handsome, especially in black with the panoramic roof and is comfortable enough to keep you sane in even the grimmest of traffic. The bolstered front seats are plush and wide, while the rear offers tremendous space.

The back of the Koleos is so spacious you could sell your house and move there and the large central armrest has enough USB and 12-volt charging points to prevent having to ever go through digital cold-turkey, no matter how long you’re on the road for. Furthermore, the rear passenger’s legs are so far from the back of the driver’s seat that you’ll never have to worry about being endlessly booted in the back by one of your giddy offspring.

The Koleos has enough room to be a seven-seater, but according to Renault they opted for space and comfort over extra seats and it does show as this vehicle actually has one of the longest wheelbases in its class at 2.71m with an overall length of 4.67m, giving rear passengers plenty of headroom and, frankly, palatial knee-space at 2,899mm. The boot is equally huge at 579 litres, which can be upped to 1,795 litres with the back seats folded down and there is even an additional 35 litres of storage around the cabin, including an 11 litre glove box and a seven litre cubby hole in the centre console.

The Koleos is undoubtedly the nicest Renault I’ve ever driven; the 4×4 2.0 diesel engine is adequately powerful at 177bhp, while its sluggish and damp 1.6 litre understudy is manageable at 130bhp, provided the car isn’t heavily loaded.

The entry level Dynamique S Nav starts at €34,490 for the base, but I wouldn’t bother with it having driven the full fat, top of the range Signature Nav dCi 175 Auto X-Tronic, which costs €46,750.

I drove the manual Koleos for a few days and it was definitely the inferior choice; in my opinion automatic transmission is a must for this car and for all suburban SUVs.

The range topping, 4×4, 2.0 litre model is, dare I say it, bordering on being a premium-quality luxury vehicle, especially with options like the BOSE sound system and hands-free parking. I even took it off-road and it was perfectly capable of holding its own up very steep inclines, through rivers and over some rocky terrain.

The R-Link 2 multimedia system with its 8.7” touchscreen is easy to use and comes with Android Auto and Apple CarPlay preloaded. The sheer size of this multimedia system is really quite notable when using the reversing camera, especially in poor conditions.

As we’ve all become so used to Google maps, it’s become almost impossible to give a non-biased review of any satellite navigation system that doesn’t use it. The TomTom system in the Koleos was grand, but I still found myself taking out my phone and using Google maps or Waze, especially when looking for the immediate information that’s only available on software developed by the data Goliath that is Google.

A rear parking camera with front and rear parking sensors is also included on all versions as well as an electro chrome rear mirror.

So, in conclusion, the Koleos is definitely the best Renault on the market right now and it’s as close to a premium product as the French marque has achieved in this class. However, the nice looking finish does lack the well-built feel of its German and Czech rivals.