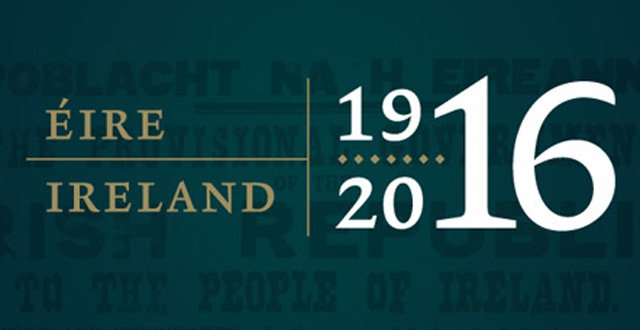 I watched the documentary 1916 with its black and white footage of Seán T O’Kelly, Seán MacEntee and other people I remember.

I read Vivid Faces: The Revolutionary Generation in Ireland, 1890-1923 by Roy Foster, based heavily on the letters of the Ryan sisters of Tomcoole in Wexford. My Ryan great-aunts were strong women; college educated, they had worked abroad, and founded some medical dynasties too.

And I could hear my mother once again, telling us that these people we knew were part of the Easter Rising and political events after.

The MacEntees were our neighbours and family friends through three generations. Maybe I knew that Seán was a former Minister for Finance, but I didn’t think of that when I ran across Leeson Park in my communion dress. No, not money, I remember the formidable Margaret MacEntee gave me a white handbag.

Then there was Great Aunt Phyllis. We sat at her feet watching the Eurovision on her colour TV.

I can just remember her with Seán T O’Kelly, former President of Ireland, and I knew they married after his first wife, Aunt Kit Ryan, sadly died. He was also the Minister who opened Nenagh Hospital in 1936.

But our mother also told us that Aunt Phyllis and her sister Min were in the GPO in 1916. They made sandwiches for Pádraig Pearse and acted as couriers.

Maybe I knew that Seán was a former Minister for Finance, but I didn’t think of that when I ran across Leeson Park in my communion dress. No, not money, …Margaret MacEntee gave me a white handbag

Their brother, Jim Ryan (later Minister for Health), was medical officer in the GPO during Easter week. My mother always added that Jim was a medical student and it was a captured British Army doctor who treated James Connolly.

During that momentous week, the girls visited another sister, a nun in Loreto Hall on St Stephen’s Green. According to my mother, they were told to “tell Mr Pearse and the boys to go home now, they’ve done enough”.

One of those ‘boys’ was Seán MacDermott. We knew that Aunt Min was with him in Kilmainham Gaol, in the last hours before his execution. Some years later, Min married another prominent revolutionary, Richard Mulcahy, who became General of the Free State Army.

Two of the Ryan sisters, Nell and Kit, were imprisoned after the Rising, and so was Jim.

I heard a chatty letter read out on RTÉ, from Michael Collins, still in Frongoch internment camp, to Jim Ryan, now home in Wexford. The letter jokes about “the weddings”. That would be the double family wedding in August 1916; there’s a photo in Vivid Faces. On that day, Agnes Ryan married Denis McCullough, President of the IRB and just out of jail. My grandmother Christina married Michael O’Malley, from the Maam Valley. He became Professor of Surgery in Galway.

My mother told us dark stories too, about the Civil War and about executions. The Ryan sisters were on different sides of the Civil War. My mother said they never spoke of those times. In that way, the family held together into the next generations.

Then there was the assassination of Minister Kevin O’Higgins, in Blackrock. He had been part of the Treaty negotiations. My aunt, Una O’Higgins O’Malley, was just a baby when her dad was shot on his way to Mass in 1927.

I never knew my other granddad but I knew he was a ‘Collins’ man. Tom Cullen (not the man in the Michael Collins film) died in 1947. His architect office – still on Suffolk Street – was raided several times during the Black and Tan era, much to the disgust of non-republican neighbours.

Among my grandmother’s papers, we found an envelope of cut-out signatures – ‘Michael Collins’ ‘Mick’. Presumably they were kept as proof of communication while destroying the orders, and later preserved in memoriam.

There was also a passport with false names; my grandparents motored across Europe on their honeymoon. Maisie, young and attractive in all other photos, poses as a stern Victorian matron.

In June 1921, they were married in University Church in Dublin, after Maisie had graduated in medicine from UCC. Her sister’s teenage diary records. “I thought Mais would die with fright,” when they thought Black and Tans were outside the church.

Tom had already spent time concealed in Kylemore Abbey. He was architect to the nuns who re-located there, after their convent in Belgium was bombed. My mother explained that nuns always travelled in a curtained carriage, away from men, and wouldn’t be searched. So that’s where my granddad hid, in the nun’s carriage, and stayed with them in Kylemore for some months.

Many years later, my sister met an elderly nun who was a novice at the time. She remembered Mr Cullen in overalls, working as their boiler man, and his fear when the convent was searched.