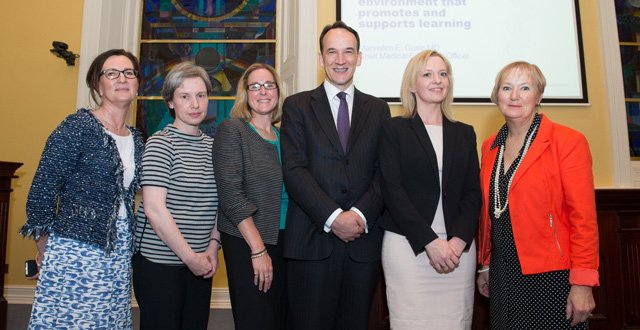 Bringing together medical and nursing students at RCSI Bahrain, under an inter-professional education (IPE) initiative, was among the activities presented at a symposium on IPE at the RCSI, Dublin, on 25 June.

The special symposium was part of the 4th annual International Education Forum, a week-long initiative attended by 28 staff from RCSI Bahrain and PU-RCSI Malaysia, and more than 130 colleagues in Dublin.

IPE is defined as “occasions when two or more healthcare professionals learn with, from, and about each other in order to improve collaboration and the quality of care” (Centre for Advancement of Inter-Professional Education, 2002).

The symposium was opened by Senior Lecturer in Physiotherapy Dr Frances Horgan, who was appointed in September as the RCSI’s first Vice-Dean for IPE. With IPE of increasing importance to regulators accrediting healthcare courses, the appointment is considered a vital means of further advancing this area at the College.

Activities in the RCSI undergraduate curricula and the perspectives of international speakers on IPE’s challenges and benefits were also showcased at the symposium.

This pilot project emerged from parameters drawn-up by the Irish Medical Council as part of the accreditation process for the medical undergraduate programme.

Ms Royston, whose clinical background is in midwifery, approached RCSI Professor of Obstetrics and Gynaecology Prof Andrew Curtain about developing an IPE project. It was decided to focus the pilot around obstetric emergencies and ‘near-misses’ that impact women in pregnancy and childbirth, to include patient stories as to how they were affected by conditions such as post-partum haemorrhage and pre-eclampsia.

Ms Royston said that, from a number of perspectives, this area is ripe for collaboration. She noted that while obstetricians and midwives (or obstetric nurses, in the case of Bahrain) have “very different jobs,”, maternal care is team-based.

“We also knew that maternal mortality rates in Bahrain were still quite high, but they are also high worldwide and this is something that is really important,” she said. “There were plenty of risk factors on the increase, with regard to challenging conditions in maternity care. And also, it was a very rich area for ethics and professionalism.”

While there are challenges worldwide in respect to teaching obstetrics and maternity care, in Bahrain these are pronounced, in that male nursing and medical students get less clinical exposure in this specialty compared to their female colleagues (the male-to-female student ratio is 60:40 in medicine and 15:85 in nursing), she elaborated.

Furthermore, there is no midwifery training programme in Bahrain, and fewer male doctors are pursuing obstetrics as a career.

Ms Royston also noted that little is known about how families in the Middle East respond to maternal or neonatal morbidities and mortality.

It was decided to link nursing students in year three — when maternity nursing is taught — with the medical students in senior cycle one. Teaching methods included ‘World Café Conversations’, which brought medical and nursing students together in a relaxed setting where contribution and conversation were encouraged.

Ms Royston said that, due to a number of social and cultural reasons, there had been very little socialisation between the medical and nursing students, therefore this type of methodology was helpful.

The project took place over an afternoon and topics included an introduction to IPE, CPR in pregnancy, managing post-partum haemorrhage, simulation of CPR, patient experiences around maternal mortality (sourced from www.healthtalk.org) and ethical issues.

Learning outcomes for the nursing and medical students were demonstration of obstetric emergency management; recognition of the impact of maternal mortality; consideration of the patient’s viewpoint; and reflection on ethical, social and cultural challenges that surround obstetric events, and on the impact of IPE on team-based care.

On the second occasion that the session was held, it was decided to involve nursing students from year four. There had been a “language barrier” with regard to student nurses in year three and some were “very shy”. In general, the nursing students in year four were more confident and had better English. Overall, feedback from the sessions was positive, with plenty of scope to further develop IPE, noted Ms Royston.

As one student observed, CPR for pregnant women was challenging and emphasised “the importance of working as a team, dividing the work between us”.

Currently at the RCSI in Dublin, there are a number of early-, middle- and late-stage IPE activities across the programmes of medicine, physiotherapy and pharmacy.

Tasks were designed so that there were interdependencies between the students, who relied on each other for relevant clinical information.

The observation that healthcare professionals could not work in silos came across during the students’ evaluations, which Dr Spooner noted as positive.

Challenges in respect of implementing IPE, highlighted by a number of speakers, included timetabling and the imbalance in numbers between medical, pharmacy and physiotherapy students.

As noted by Dr Judith Strawbridge, Senior Lecturer at the RCSI School of Pharmacy, there is pressure on curricula, everybody is busy and “there is so much to be taught”. However, she said the creation of the Vice-Deanship will be helpful strategically, while there are many “champions” eager to drive IPE forward.

Guest speaker Dr Maryellen Gusic, Chief Medical Education Officer at the Association of American Medical Colleges, presented on ensuring competence in IPE and creating an environment that promotes and supports learning. She also noted the increasing importance of IPE in medical education and in the practice of medicine.

During her presentation, Dr Gusic also referred to the work of the IPE Collaborative (IPEC), formed in 2009 by associations of schools of the health professions. This organisation aims to foster a common vision for team-based care; promote efforts to reform healthcare delivery and financing consistent with that vision; and contribute to development of leaders and resources for substantive inter-professional learning.

Speaking to the Medical Independent (MI) at the symposium, the RCSI’s Vice Dean for IPE Dr Horgan said the College is fortunate in having a number of “champions” who had initiated IPE activities over recent years. She said the College aimed to put in place more longitudinal evaluations to assess the impact of IPE over time, and to further engage with staff and students to identify the best means of incorporating IPE at undergraduate and postgraduate levels.

As she had earlier outlined, IPE is a tool to accomplish linkages between the education system and the healthcare delivery system; and to achieve better patient care, health outcomes, and more efficient and affordable educational and healthcare systems.