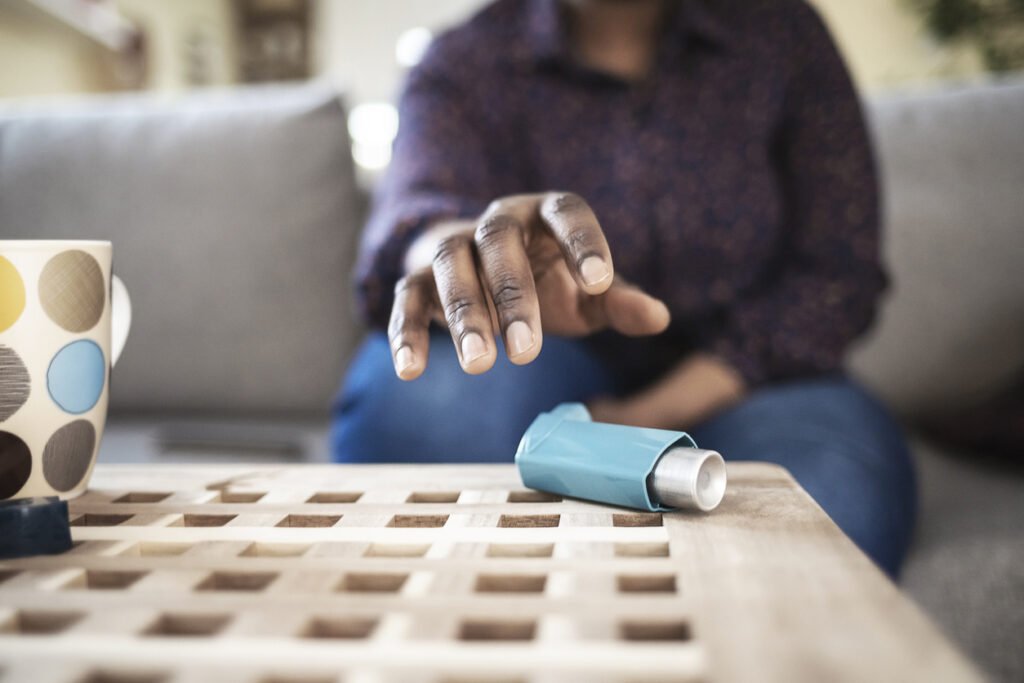 A 70-year-old male patient presented for review of a chronic cough. He had a history of childhood asthma but had not been treated for asthma as an adult. He had worked in the navy previously. He described a chronic cough for two years productive of small amounts of sputum.

He had been treated with several courses of antibiotics with no improvement. A CT chest demonstrated some minor atelectasis but lung fields were otherwise clear. Pulmonary function tests were consistent with a diagnosis of asthma – within normal limits but with a significant response to bronchodilator.

A 43-year-old woman presented with exertional dyspnoea. Her past medical history was significant for Hashimoto’s thyroiditis and allergic rhinitis, and both her father and cousins had a history of asthma. She had had pertussis as
a young child and had a frequent dry cough until the age of six but was never diagnosed with asthma and was well for the remainder of her childhood.

She grew up on a farm around animals and hay. Occasionally during her 20s she would find it hard to catch her
breath and would develop a wheeze with exercise.

Since having a lower respiratory tract infection eight years prior to presentation she had had episodes of nocturnal dyspnoea and wheeze; a year prior to presentation she was commenced on budesonideformoterol but did not experience any symptomatic improvement. At the time of assessment she was having symptoms of dyspnoea
and wheeze two-to-three days a week, with nocturnal dyspnoea and a wheeze with exercise.

PFTs demonstrated a mild obstructive deficit with a significant response to bronchodilator, consistent with a diagnosis of asthma. Skin prick testing was negative for all allergens, and a serum IgE was normal, thus there was no evidence of associated atopy. She was switched to fluticasone-salmeterol, initially two puffs BD, and upon review had no symptoms of asthma, did not require her PRN salbutamol and was able to take up running again with no exacerbation of symptoms. The combination preventer therapy has now been reduced to one puff BD.

A 29-year-old female patient was referred for assessment of intermittent chest pain and nocturnal dyspnoea. She had never been diagnosed with asthma although described recurrent bronchitis as a child which resolved when she reached adulthood. There was no family history of asthma or atopy. Three months prior to presentation she had had a short febrile illness, following which she developed nocturnal chest heaviness associated with some dyspnoea and occasional wheeze.

On examination chest was clear to auscultation. She was commenced on budesonide-formoterol and PRN salbutamol, but after eight weeks of regular preventer therapy she continued to complain of ongoing symptoms of chest tightness and discomfort for which she was still requiring regular salbutamol (which provided immediate relief). She was switched to a novel therapeutic combination of glycopyrronium, mometasone and indacaterol, which significantly reduced her requirement for PRN salbutamol. Repeat PFTs demonstrated a significant improvement, with an increase in
FEV1 of almost 750mL.

Asthma is defined as a chronic disease of variable airway obstruction due to mucous hypersecretion and bronchial hyperreactivity.1 The diagnosis is made on pulmonary function tests (PFTs) demonstrating a significant response to bronchodilator (defined by the American Thoracic Society as greater than 200ml and 12 per cent increase in FEV1 after bronchodilator).1 Although asthma is often diagnosed in childhood, there is also a subset who are diagnosed in adulthood. This diagnosis is often delayed due to an atypical presentation. Therapy is individualised based on severity of symptoms and is then up- or down-titrated depending on response. Therapy is becoming increasingly focused on phenotype and there are a number of adjunctive therapies available.

Patient education remains paramount, particularly with respect to daily monitoring of peak flow and symptoms, and with respect to correct technique with inhaler therapy. This is particularly important in older patients with asthma and suboptimal control, in whom poor inhaler technique may contribute significantly to lack of improvement with therapy. Regular review is important to ensure therapy remains appropriate for both severity and level of control.

Most asthma begins in childhood, with 95 per cent of asthma patients having had their first epodes before the age of six years. The main risk factors in asthma beginning in childhood are: Genetic predisposition/a family history of allergy/asthma, viral respiratory infections, bacterial colonisation, allergic sensitisation, and tobacco exposure.2
Patients with childhood asthma tend to have a Th2-predominant inflammatory pattern and a good response to corticosteroids.3,4 Asthma that begins in adulthood is often non-atopic, more severe and associated with a
faster decline in lung function.1,2 It often requires treatment with high doses of inhaled and/or oral steroids.3

In recent years phenotypic types of asthma have begun to emerge. In the Severe Asthma Research Programme, five clusters were identified, and 80 per cent of those studied could be divided into a subtype using three variables: Baseline FEV1; maximum FEV1 after bronchodilator; and age of onset of asthma. The cluster with the most severe phenotype was largely made up of patients with a diagnosis in adulthood.2

Obesity is a risk factor for adult-onset asthma and increases the risk by up to 50 per cent.3 One study has examined long-term outcomes in adult-onset asthma and changes in asthma severity over time. Practically all, 95 per cent, of the patients in the study had ongoing active asthma five years after diagnosis, and half had moderate to severe disease.2 In a study assessing severity of adult-onset asthma, those with severe disease were less likely to be sensitised to common allergens, had more nasal symptoms, and were more likely to have a history of nasal polyposis.4

Several phenotypic patterns appear in the context of adult-onset asthma (see Figures 1 and 2). These have been described based on presentation (allergic, non-allergic, occupational), airway inflammation (eosinophilic and non-eosinophilic), and severity.6 Of these, presence or absence of eosinophilic inflammation (Th2- or non-Th2-associated) is a key phenotypic differentiator.5
Studies suggest low levels of eosinophilia in obesity-related asthma.3 Obesity is associated with low-level systemic inflammation, with increases in many inflammatory markers including CRP, IL-6, TNF-alpha, and leptin, which may play a role in the link between obesity and adult-onset asthma.3 However, patients with severe asthma appear to have higher levels of both blood and sputum eosinophilia than those with mild-to-moderate asthma.4

Women are significantly more likely to develop asthma following puberty, and have more severe disease.2,3 Asthma is 20 per cent more common in females than in males over the age of 35 years.2 It appears that it is the non-allergic asthma that has a higher incidence in women of reproductive age, whereas there is no similar difference seen in the incidence of allergic asthma.2

Phases of the menstrual cycle have also been associated with asthma severity and atopy in women.3 Thus there appears to be a hormonal role, possibly oestrogenic, although the exact link remains unclear.

In adult-onset asthma associated with the Th2 phenotype and related to rhinosinusitis, it is important to identify the phenotype early, as pulmonary function is poor from onset and exacerbations occur frequently5 – (see Figure 3). Thus utilising a biomarker, such as fractional exhaled nitric oxide (FENO) that identifies Th2-type inflammation may be highly useful.5
Th2-type biomarkers including blood eosinophils, FENO, and periostin are used to identify those patients with Th2-driven adult-onset asthma.5 These biomarkers are particularly useful to assess asthma/COPD overlap syndromes, and may assist with prediction of response to corticosteroids.5

In childhood-onset allergic asthma, treatment with daily corticosteroids combined with long-acting beta-agonists is usually very effective. In contrast, many patients with adult-onset asthma do not have a good response to corticosteroids.2,5 Specifically, non-Th2- type adult-onset asthma may require other treatment strategies including macrolides, diet/weight loss and smoking cessation.5

In addition to avoidance of exposure to known precipitants such as cigarette smoke and occupational sensitisers, targeted treatments based on phenotype are now being increasingly developed.

Omalizumab is a humanised antibody against IgE. It was originally developed to treat severe allergic asthma, but has been shown to have efficacy on non-allergic asthma and nasal polyps, so may be of benefit to certain patients with adult-onset asthma,2 although its efficacy appears to be greater for early-onset asthma.5

Mepolizumab is a humanised monoclonal antibody against IL-5 that selectively targets and inhibits eosinophilic airway inflammation. In some recent studies it has been shown to be effective and safe as a treatment for patients with severe eosinophilic asthma; it has also been demonstrated to have efficacy in treatment of severe nasal polyposis.

Lebrikizumab is a humanised monoclonal antibody that binds to IL-1.3 It has been shown to be useful for patients with moderate asthma, particularly the subset who had circulating levels of periostin above the median with a high Th2 phenotype.2

Reslizumab is a humanised monoclonal antibody against IL-5, which has been shown to reduce exacerbations and improve lung function to a greater degree in those with adult-onset asthma than childhood asthma.5

Bronchial thermoplasty is a bronchoscopic procedure during which controlled thermal energy is applied to the airway wall, decreasing the amount of smooth muscle.2 It may offer one of very few therapeutic options for patients with adult-onset non-eosinophilic severe asthma. Studies have shown improvement in lung function, airway hyperresponsiveness, quality-of-life, and symptom scores, with a reduction in exacerbations and hospitalisations.2

For obese patients with non-eosinophilic asthma, the only treatment option at present is significant weight loss, and a study has demonstrated improved asthma control following bariatric surgery in this cohort of patients.2

In summary, asthma investigation and management is becoming increasingly individualised. Adult-onset asthma has
distinct phenotypic variants that require specific investigations and often a different therapeutic approach than childhood asthma, with less reliance on inhaled corticosteroids and an increased focus on lifestyle modifications and targeted monoclonal therapies.