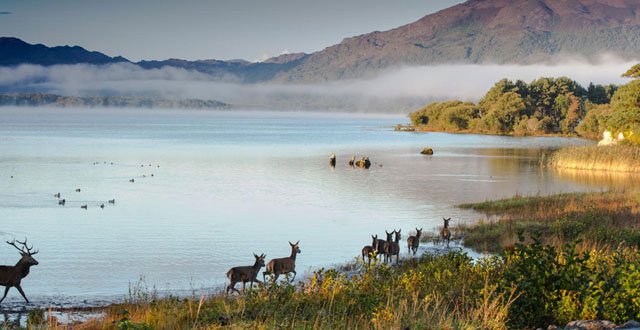 I  really enjoyed the IMO AGM this year. It’s funny, because I went with very low expectations. Since leaving work, I feel rather irrelevant. And yet my views are as fiercely held as ever.

But the AGM was back to ‘our’ hotel, Hotel Europe in Killarney. The location is stunning. Simply looking across the lake at mountains is good for the soul. Add in great food and lovely staff and it’s the place to be. It would be a shame to miss it.

On the way down, I heard the soothing, measured tones of Peadar Gilligan (incoming President) on the news. It’s an IMO tradition.

Shortly after we arrived, I got a message from The Irish Times. They’re printing my article the next day! It’s a light-hearted look at trolleys. (Yes, seriously.)

I feel better. Then I start to worry. What will the emergency medicine crowd think of my article? I nab Peadar – he likes it. Whew!

I have another prop with me: The answer to a parliamentary question, which confirms that the HSE have no data (their emphasis) on trolley patients, as regards age or illness. It’s because HIPE coding is not done unless the patient physically moves to a ward. How can the HSE solve the trolley problem if they know nothing about the patients?

Peadar suggests I use it during the afternoon motions session.

By now, quite a crowd has gathered, including a healthy turn-out of articulate NCHDs. It’s great to catch up with old friends, mostly people I meet only at the AGM. Later, the hall is packed for the panel discussion on Sláintecare.

The weather was not welcoming in Killarney at first. The mountains were greyed out by the rain. Storm winds herded chairs and tables along the terrace as Matt (psychiatrist, musician and MC extraordinaire) gave a talk on depression. Was nature in sympathy?

But the IMO always brings the sunshine.

I skipped the talk on GDPR and sat outside, watching the sun chase the last clouds from the mountain. Strangely beautiful music came from a balcony overhead. I looked up and saw Larry (GP and piano player) also listening. Roisin Dubh he called down to me. So we sang a few lines “A Roisin, na biodh bron ort…” as Ina (Chair of the Public Health Doctors) played the uileann pipes. Future committee meetings may be very interesting.

Maybe because of the setting, I fell into a number of remarkable and highly personal conversations with people I don’t know very well. It reminded me that we can never guess what troubles are going on in the homes and lives of colleagues.

Appropriately, there was a session on burn-out among doctors. The rates are astonishingly high. That was highlighted at the consultant national meeting, when two doctors referred, almost casually, to their experience of severe burn-out and how poorly their employers dealt with it.

As I attended debate sessions and listened to the life of a coroner, Annie was having her own AGM. There were long conversations with Niamh (artistic director) about funding for the arts in Wales and Ireland and discussions on plays with Aoife (theatre director) as well as getting advice from Matt (superhero) on handling an audience.

Meanwhile, Stephen Donnelly (FF health spokesperson) talked with Asam (surgeon and health realist) and me about medical employment and the peculiarity of labelling graduates in a negative manner as ‘non-consultant’. It’s interesting to get such a different perspective.

Later I met Minister for Health Simon Harris. He has a remarkable memory. We took up the conversation where we left off last year – beds and trolleys, of course. He wants to open beds quickly and can’t understand why so many were closed. I said if it’s very clear that beds are coming, morale might start to improve.

We live in hope, and there’s been very little recently.

Very late on the last night, when even the IMO staff were off-duty, I sat with the media pack in the bar. Priscilla (Mindo) decided it was time to set me up on Twitter. The Irish Times and RTÉ were shaking wise heads, saying “Twitter at 3am – this won’t end well.” But it’s ok, I intend to lurk for a while. So we ordered another round and continued.

Annie and I had a weekend of fun and good company and a varied programme. Thanks to team IMO for a great AGM. And a big thank you to the kids who campaigned relentlessly to bring us all back to Hotel Europe.