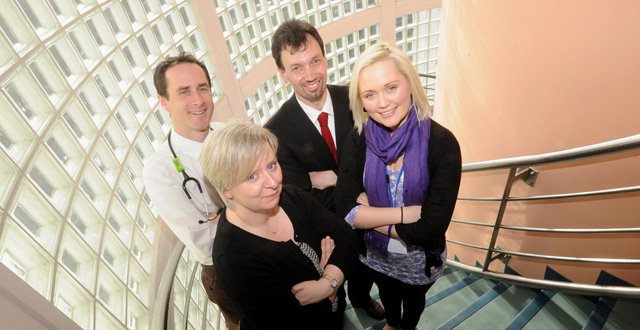 Malaria is an old disease. It has been with us since the beginning of human history and its longevity has done nothing to lessen the toll it takes. According to estimates by the WHO, 207 million cases of malaria occurred globally in 2012, resulting in 627,000 malaria deaths. A so-called ‘disease of poverty’, most cases (80 per cent) and deaths (90 per cent) occurred in Africa.

Disturbingly, 77 per cent of these deaths were in children under five years of age. Prof Sam McConkey, Principal Investigator and Head of the RCSI’s Department of International Health and Tropical Medicine, has experience of this.

“I worked for a couple of years in a mission hospital in Sierra Leone and in a typical night you might get five or six children in with severe malaria, and sadly no matter what we tried to do to try to treat them, there was maybe a 10-to-15 per cent mortality rate,” he tells the Medical Independent (MI).

“I’ve looked after many small children who have died from it and my own personal belief is we need to be focusing on preventing malaria, rather than trying to hopelessly treat children who are very, very ill.”

Many of us now believe that you need a multiepitope approach, whereby we’re stimulating an immune response against several different targets of the malaria cell

With recent developments at the RCSI, this aim may be one step closer. As Christmas loomed, the College announced that two new malaria vaccines its researchers had been putting through a Phase 1 trial had proved to be well tolerated and produce a strong immune response. They have now progressed to a Phase 2 trial at the University of Oxford and Imperial College in the UK.

“This is the first time the new vaccines were trialled in humans and the first human clinical trial of any malaria vaccine to be carried out in Ireland. Completion of this type of ‘first-in-human’ study in Ireland is significant, not only for malaria vaccine research, but also for translational research in general in Ireland,” the statement from the RCSI said.

The clinical trial was a collaborative, international effort, seeing researchers at the RCSI Clinical Research Centre in Beaumont Hospital work with their counterparts at the Jenner Institute at the University of Oxford. The vaccines were developed at the University of Oxford and use the gene for malarial circumsporozoite protein inserted into a weakened adenovirus. The project is funded by the European Vaccine Initiative (EVI), with the support of Irish Aid.

“It was wonderful for a number of reasons,” says Prof McConkey, who was Chair of EVI’s Scientific Advisory Committee and who has been working on malaria vaccines for years. “It was one of the first Phase 1 studies in Ireland and certainly one of the most recent. We’ve pioneered new clinical capacity, and I am really, really pleased about that.”

However, the nature of the malaria cell has made developing a successful vaccine frustratingly difficult.

“It’s more like an amoeba or mammalian cell. The malaria genome is much more similar to ours than, say, a viral genome, so it’s a much bigger organism with a complex life-cycle and multiple proteins,” Prof McConkey explains.

“Unfortunately, an immune response against one single protein or one single surface component probably won’t be enough. Many of us now believe that you need a multi-epitope approach, whereby we’re stimulating an immune response against several different targets of the malaria cell. It’s likely, we hope, that the two vaccines we studied will become part of a multi-component vaccine.”

The vaccines (ChAd63 CS and MVA CS), which were tested on 24 Irish volunteers, were found to have an excellent safety profile and produced the appropriate immune response, generating specific T cells that are primed to respond to malaria proteins.

“One of the things that’s unique about this strategy is that we’re trying to stimulate T cells. These vaccines do stimulate antibodies but they also stimulate T cells’ responses,” Prof McConkey says. “And there is very good reason to believe that T cells protect against the liver stage of malaria.”

However, it is very difficult to predict when the vaccine might be complete but the indications are good, says Prof McConkey.

“It has gone into Phase 2 trials. When you start a Phase 1 trial, a successful outcome is that the product is safe enough to move onto the next stage, where it’s evaluated for efficacy. So by that measure, this trial has been successful.

“If the Phase 2 is successful, it may well go into a second Phase 2, with combinations of vaccines being given simultaneously. Then a Phase 3 might see 10,000 small children being given the vaccine to see how it works in a real-world setting. ”

Despite the cutbacks to State-sponsored research (to be fair, Irish Aid has provided €8 million to EVI since 2007), this development shows what Ireland is capable of achieving in the demanding and highly-regulated world of research and development. This is a point Prof McConkey is keen to stress.

The sources of investment have mainly been philanthropy and Governments. What hasn’t been to the fore is private industry

“In recent years the research money in Ireland has been very tight, but fortunately there is still our research funds from the EU. And a lot of research involves collaboration with experts around the world.

“Some funders have been very generously and very strategically funding malaria vaccines over the last 25 years. The ones I would pick out are the Wellcome Trust, the Gates Foundation and also the European Union and the Irish Government. So the sources of investment have mainly been philanthropy and governments. What hasn’t been to the fore has been private industry.

“The pharmaceutical industry is changing. Pharmaceutical companies increasingly see themselves more like mass-production and distribution channels. They are going out to small biotech companies and universities to try and make links and get new products. They have scouts, a bit like Man Utd, and they’re looking for the next blockbuster.”

Prof McConkey believes that with industry’s help, vaccines for diseases such as malaria can be progressed quickly.

“I think it’s important that the biotech and pharmaceutical companies — who are manufactures and exporters of products — know the RCSI has done this Phase 1 study, that we have done it successfully, and that we’re open for business to do more. So rather than people thinking you have to move elsewhere to do Phase 1 trials, we want to say loudly and clearly that we’re happy to do these first administrations in human studies.

“And that’s something that’s new and different. Five years ago, no-one in Ireland could have said that.”