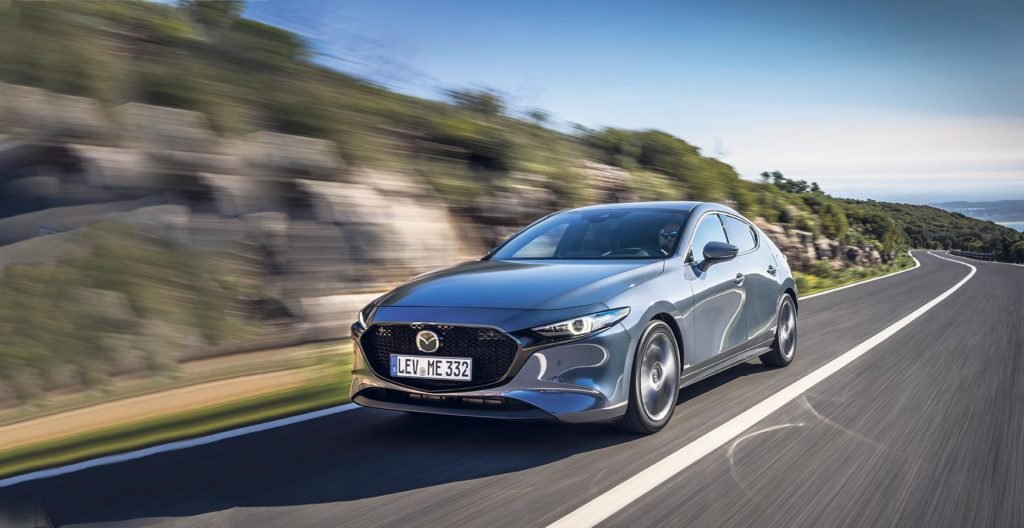 I plonked the Mazda3 into the ‘boring car for boring people’ box years ago without ever having driven it. It was rather dull looking, had a very uninspiring name and as a teen, I’d never seen anyone abusing one in a tyre-smoke filled car park in West Dublin, which at the time was the yardstick for a good, small Japanese car. Mazda sent me out the all-new Mazda3 Skyactiv-G this month and it dispelled many of my unfounded assumptions, although the name does still need some work.

Firstly, this all-new fourth-generation Mazda3 has had its face done, and I don’t just mean a cheeky little nip and tuck. It is now a strikingly good-looking car, with beautifully stylish headlights and a low, almost menacing grille. It has a short, attractive profile and some cool circular tail-lights. Not to gush too hard, but I’d say there hasn’t been a family hatch as good-looking as this since the Alfa Romeo 147.

Instead of falling in line with the competition, Mazda has avoided using a small turbocharged engine, opting instead for a 2-litre naturally aspirated motor, which is producing a slightly flaccid 120hp. The car has a lovely manual gearbox and pushing a naturally aspirated car through the rev-range is a lot of fun, but 120hp leaves you wanting more. Despite the lack of power, this car handles wonderfully, which I’ve come to expect from Mazda. The first question I had for the team after I tested it was “when is the MazdaSpeed3 coming out?” to which they replied, “we don’t know, there are no concrete plans for a MazdaSpeed version yet”. Watch this space people, because that car will be something to behold. Instead, Mazda were more interested in talking about the car’s intelligent 24V mild-hybrid system, which minimises fuel consumption and lowers emissions by recycling energy recovered during deceleration, which powers an electric motor that assists the engine. Thrilling stuff.

Later this year, Mazda is bringing out the Skyactiv-X petrol engine with 179bhp for the Mazda33. That’s not a typo; the press release says ‘Mazda3 cubed’. Mazda describes it as combining “the fuel efficiency of the Mazda 2 with the performance of the MX-5”. This engine will use Spark Plug Controlled Compression Ignition (SPCCI) technology, making it the world’s first commercial petrol unit to combine the spark ignition of a petrol engine with the compression ignition of a diesel. Mazda says it will offer drivers the free-revving performance of a gasoline engine and the superior response of a diesel, all while producing 177hp and 224Nm of torque.

Mazda claims that it has avoided using a touchscreen infotainment system, as they can be distracting to use while driving. Some reviews I have read have praised the Japanese brand’s infotainment system, so it’s just a matter of opinion, but I don’t like it. I prefer the larger touchscreen systems over the smaller, rotary-controlled setups. I also find Mazda’s operating system to be a bit dull, especially compared to Volkswagen Group’s offerings. Despite this, the system does come with Bluetooth, Apple CarPlay, Android Auto, sat-nav and a head-up display. The Skyactiv-G model I tested had an incredible 12-speaker Bose audio set-up.

This is a good-looking, cheerful car with a lovely minimalist interior set-up that utilises ‘Japanese Takumi, artisan, craftsmanship’. It’s one of the quietest cars in its class, with both wind and road noise very well suppressed. The legroom was good, but the rear headroom was compromised due to its sloping roofline — fine for kids and small people, but I was uncomfortable back there.

The Mazda3 fights in a tough weight division, coming up against heavy hitters like the Golf, Focus and Civic, as well as the less costly Korean models like the Kia Ceed and Hyundai i30. Despite this, Mazda has sold six million Mazda3s in Europe since 2003, making it a worthy and long-lasting rival. I feel this latest model has its sights set at the more established premium models, a battleground Mazda has only truly conquered with their sports cars. This car is definitely worth a test drive, but maybe wait for the new ground-breaking engine before you pull out your wallet.