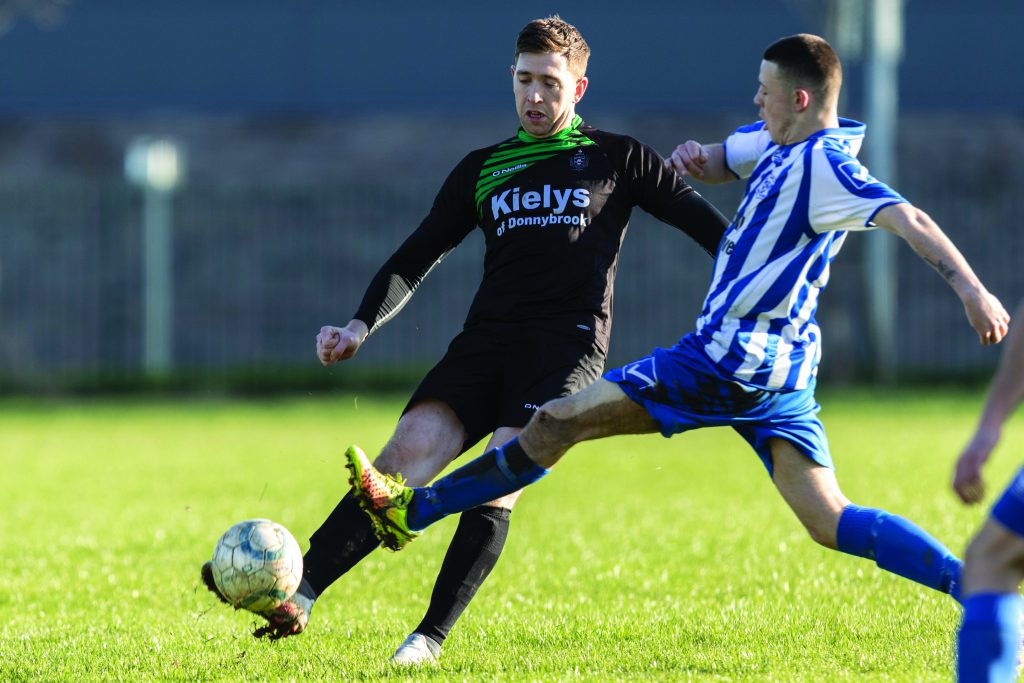 St Vincent’s battled to a scoreless draw away to high-flying Verona FC. Tense throughout, even attritional at times, both sides squandered chances to claim all three points. The result keeps the strong run of form going, and puts the team within touching distance of those above them in the league standings.

Wind and rain abated for a period to leave perfect weather conditions for football. Pity the same could not be said for grass pitch, which had been torn-up in recent weeks after heavy use in inclement weather. The rugged playing surface meant even short passes were sent on a treacherous journey. The standard of football suffered, and the contest could not be described as being one for the neutral.

Vincent’s opened brightly. Rory Durand and John Cosgrove pieced passes together to create an opening for Peter Kelly, whose looping 25-yard effort came off the woodwork. Eddy Wrynn, working the right flank, linked play to get into dangerous areas, but the final ball was too often lacking. As Verona established a foothold in the game, the Vincent’s defence of Mark Dwyer, Kieran Keane, Dan Hales and Gav Kane stood firm. Despite being one of the top-scoring teams in the league, Verona were limited to half-chances in the first half. Level at the break.

The second period followed a similar pattern to the first. Verona held possession for long periods, without coming close to penetrating the stout defensive line. Seemingly meandering to a close, the game unexpectedly burst into life in the closing 15 minutes. Dan Hales saw a powerful header blocked on the line, and his close range rebound was somehow turned round the post by the keeper’s outstretched fingertips.

Verona broke from the resulting corner and saw their own headed effort whisper past the post. Then a reckless tackle, followed by some verbal clashes with the referee, reduced Verona to 10 men. Buoyed by the advantage, Vincent’s pressed for a winner. Cian Ward was played in down the left, but hooked a snap shot wide under significant pressure. Verona countered and hit the post from a free kick, which somehow directly led to Vincent’s best chance of the game. Breaking swiftly, James Clarke fed John Cosgrove, who sent Fionn Lynch through on goal with a slick slide rule pass. Despite Fionn doing everything right, the keeper came up trumps to save a point for his side.

0-0 the final score after a frantic end-to-end finish. The team is left in no doubt that they can compete at this level. Consistent performances such as this will earn more wins than losses. While the talent has never been questioned, the players seem to have adjusted to the pace and intensity demanded week-on-week in this division. With confidence rising, Vincent’s will aim to maintain the positive momentum and climb the table.

Dan Hales was a rock at the heart of the Vincent’s defence and a key reason Verona were kept off the scoresheet. Relatively new to this standard of soccer, the former Offaly footballer showed off rapidly improving anticipation and positional sense to complement his tremendous athleticism. Dan bullied opponents all afternoon and won every high ball that entered his airspace. He almost came up with a late winner, but was denied by a fantastic save. Dominant from start to finish, Dan will look to keep the superb run of form going over the coming weeks.

Looking to extend the unbeaten streak to five, the team welcomes Inchicore Athletic to St Benildus on Friday 8 February. Inchicore are seeking to avenge the 4-0 defeat in the return fixture, and Vincent’s will need a big performance to come away with three points.

The annual table quiz will take place on Thursday 21 March at the Dropping Well pub. A great evening’s entertainment, the club would like to invite all quiz enthusiasts to come along and support the club. Non-enthusiasts are also welcome!

Training continues every Wednesday evening from 20:15 to 21:45 at St Kilian’s German School until late March, and we are always looking for new faces to get involved.