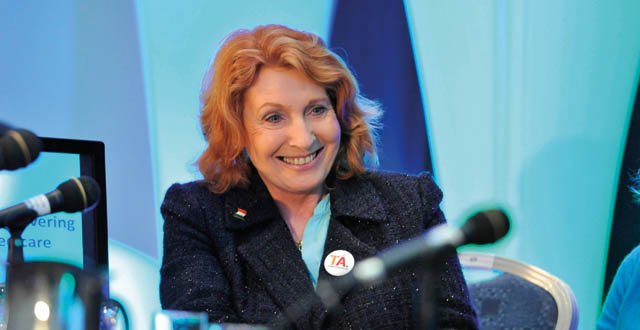 At a recent announcement of funding for a counselling service, a woman approached Minister Kathleen Lynch and told her she hoped she would “be in this job forever”.

“And I just wondered what I had ever done to her,” recounts Minister Lynch wryly, responding to this newspaper’s questions around her political future, during a wide-ranging interview.

Speaking to the Medical Independent (MI) before embarking on the campaign trail, the remark was not meant in all seriousness, but was still a revealing reflection on five years in Hawkins House.

The Cork TD has gone on record as advocating a department for primary care (which is in Labour’s manifesto) and told the Irish Examiner in January that she would “absolutely love” this senior ministerial position. But all of that remains to be seen.

Minister Lynch’s portfolio encompassed the most sensitive areas of Irish life, and the recent foster home case in the south-east is the latest in a long history of social care controversies.

Admitting to many “sleepless nights” over her term, the junior minister nevertheless felt that “exceptional things” had been achieved in the face of “extraordinary” economic circumstances since 2011.

The Minister can point to free GP care for under-sixes and over-70s, improving societal awareness of mental health issues and new initiatives in areas like perinatal mental health and dual diagnosis as among the gains made.

One of the trickiest issues facing the next government, in respect of primary care, will be the ‘NAGP question’. The GP association is claiming 1,500 members and many consider its case for inclusion in GP contract talks as gathering strong momentum.

But Minister Lynch suggested that the coalition, if returned, would look to maintain the status quo.

“That would be very much a question for a new government. But what I would say to you is that it is not as if the NAGP have not been met — they have — and I would like to think that their concerns in relation to the under-sixes and the over-70s have been taken on board.”

She said issues such as retention, increasing the workforce, supports for rural GPs and developing primary care teams need to be progressed. Contract talks continue during the election period, she added.

“Whether or not the NAGP will be part of the talks in the future, I am not certain about that. I do think that when you have two unions who have different views on particular issues, it is always more difficult to conclude negotiations. I would hope that when we do sit down as a government to look at what comes out of those negotiations, that we will be able to persuade the NAGP that these are good for their members as well.”

If all of the NAGP’s concerns are not addressed “in the final outcome”, she is “sure it will be possible to take those on board”.

Meanwhile, she said GPs had been expected to be “a jack of all trades” when they “can’t possibly be”.

‘I do think that when you have two unions who have different views on particular issues, it is always more difficult to conclude negotiations’

In that respect, Minister Lynch said she was pleased to see the “coming together in a bigger practice” of GPs who may have different special interests.

“I think that really is the way we are going and the way we should go — and that has to be part and parcel of the negotiations and the discussions around a new contract.”

Would that mean the end of single-handed practices? “Well you can’t do that, because GPs are sole traders, they are highly educated, articulate and independent-minded by nature,” she responded.

“But I think most practices now recognise the value of having someone else to consult or fall back on, and I think their patients will recognise the value in that as well.” She said this does not necessarily mean that all GPs had to be in a primary care centre.

In recent weeks, Minister for Health Leo Varadkar signalled his belief that free GP care for all — a signature plank of the current Government’s policies — would not be possible in the next term of government. He said the system is about 500 GPs short as it stands.

“I was a little bit amused at the Minister for Health, as he is now, saying we won’t be doing universal GP cover — that is his opinion, and the Fine Gael opinion. The Labour Party is a party in Government as well, and I think if we had waited on that element of the Government, we wouldn’t have had the under-sixes and the over-70s…

“We are convinced that it needs to go up to 12, up to 18 and down to 65 in the first instance, rising it up from the bottom and bringing it down from the top.” Thereafter, it would proceed to the age categories in the middle.

On Varadkar’s remarks, she said that “to make that kind of bold, bland statement is not taking into account the possibilities of what you can do.”

She said the Labour party foresees that the economy will stabilise at about 3.5 per cent, “which is a very good growth rate… ”

In this respect, “we should be able to devote more resources to things like primary care”.

“But in saying that, I have always made the argument — and will continue to make the argument — that you cannot do that unless you first build up the system that can take that strain and that is why I talk about the amount of GPs coming out of training every year and how do you retain them.”

She believed the “guarantee of income” associated with roll-out of the under-sixes and over-70s initiatives was a ‘pull’ factor for GPs.

“Every other country closest to us has done it. In some places, it is with a small fee attached. In other areas, it has no fee at all attached. But no matter who pays the bill, the bill still has to be paid. And I do think that giving young graduates the confidence to stay in a country that they know best, with a people they know best, must have an effect eventually but it won’t happen on its own — we have to be proactive on it.”

Would she foresee universal GP cover attracting a small fee?

“No, we haven’t done it up to this point, and it wouldn’t be the intention to do it… I do know in other countries there is a small fee attached. I would prefer not to personally, because it just gets messy, it means more administration for GPs and God knows they have enough of that… ”

Minister Lynch is also keen on expanding the role of pharmacists. “People are always far more comfortable with the pharmacist than they are with anyone else. That is why I think they have a huge role to play… ”

On Universal Health Insurance (UHI), Minister Lynch said she believed “you should build up the system first”. She said she “always believed that” and hadn’t changed her views in five years, nor beforehand.

The Labour Party’s health manifesto (which had not been released at the time of this interview) includes a proposal to split the Department of Health and create two senior ministries for urgent care/hospitals, and for social/primary care.

Minister Lynch said it was only six months ago that she managed to get HSE officials from mental health and primary care sitting around the table with her together. She said that while the Department of Health would be divided, it would have “no wall”.

As it stands, however, links between the emerging structures in acute and primary care — the Hospital Groups and the Community Healthcare Organisations — have not been well established.

At a recent IMO GP meeting in Dublin, former junior minister for primary care (and ex-party colleague) Ms Róisín Shortall contended that there was no alignment between these structures.

Inclusion Ireland has expressed concern that HIQA inspections of disability centres relate to particular units rather than the whole facility, among other issues.

MI asked Minister Lynch if she had raised this or other issues regarding inspections of these centres with HIQA.

She said that, when inspections of disability centres began in 2013, it was anticipated that issues of concern would be identified, just as with inspections of nursing homes.

Minister Lynch said “we are going to have to take a serious look at the regulations and the statutory instrument”, in this respect.

People with disabilities deserved to live in comfortable homes, not a sterile environment, “whilst ensuring of course that their care and protection is ensured,” she said.

Meanwhile, it “worries” her that many residents in such homes appear not to be “empowered” to raise complaints.

Reflecting on her time at Hawkins House, Minister Lynch acknowledged that relationships with GPs were at times “very fractious”, but hoped there was now more trust.

She doesn’t know if she will be back, though. “Will I get re-elected? I don’t know. Do I know enough about this area now to want to come back in here? I think it will be different; it will be easier in the next term. I think the last five years that we have come through have been particularly difficult for everyone …”

She is sure she hasn’t pleased everyone. “But anyone who sets out in life thinking that everyone will be happy with you is in for a rude awakening.”