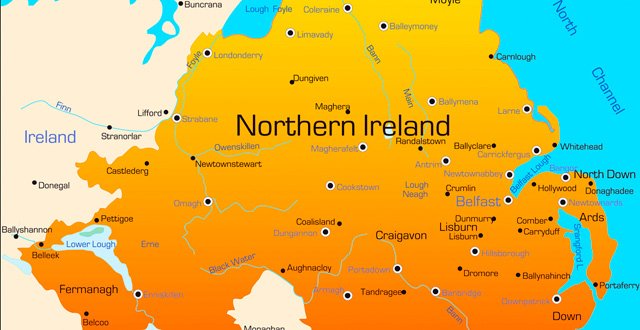 I was surprised, not because he had said ‘fiddlesticks’ and had in fact used a more emphatic word, but because he was an enthusiastic member of Sinn Féin in the North.

“Do you think,” he continued in the same rousing tones, “I am going to pay 50 quid to see a scoundrel like you (he didn’t exactly say ‘scoundrel’, by the way)? Have you seen the cost of a car down South, there are no school dinners and you have to pay for schoolbooks, the prices are sky-high and the country is going down the toilet. You could die on a waiting list if you didn’t die in casualty first and your golfers are terrible.”

He paused and took a deep draught of his reasonably-priced Dutch beer.

“That, you understand, is not my official position.”

That was a few years ago. Shane Lowry has improved and Rory’s back is out. A few years of Conservative rule, followed by an impending Brexit, have changed perspectives and a united Ireland is now, at the very least, a proposition worth considering.

Apart from the differences in culture and outlook, to say nothing of some inconvenient history, I wonder what would happen to the healthcare systems should Ireland be ‘a nation once again’. It would be interesting, at any rate.

The Tories have made a shambles of the NHS. It takes three weeks to see a GP in the North, and when you finally get in, you are only allowed to discuss one complaint. I don’t care what they call it, but that is no longer general practice.

I worked in Northern Ireland years ago. There were no trolleys in casualty, the waiting list for an elective operation was a few weeks and psychiatric services were well resourced. It was a pleasure to be a doctor, with good rotas and decent pay. It is difficult to know which health system is worse now, the North or the South. I suppose the ageing GPs in the South are keeping a reasonably good show on the road, while the hospitals are better in the North, if you could get into them.

If Scotland leaves the Union, then maybe Ireland won’t look such a bad bet to the Northerners. The nationalist/unionist divide may be the last throes of the Reformation, but tribalism can still be potent. Mainland Britain seems to have forgotten about the North altogether, and it is a mystery to most why Arlene Foster and the DUP were in favour of Brexit at all. It was like foxes voting to bring back hunting.

If the NHS in the North, and the HSE in the South, were to amalgamate, it would be a sight to behold. Do you remember what happened when the health boards coalesced? The number of managers went up, and the duplication of jobs rose too. The good ones retired and the bad ones were promoted. We could have an enormous sort of Politburo; a HSE gone rampant.

I recently went back to a Northern town where I had spent many happy years, and there I met some ex-SHO pals of mine. I was offered several GP jobs on the spot. They just cannot get GPs to work in the North any more. In my time, they didn’t even have to advertise in the BMJ; the principal simply picked from a pool of willing candidates in the area.

It is difficult to compare the experience of being a GP in the UK and in Ireland. UK family doctors seem far more regulated and smothered in paperwork. They tend to work in health centres with loads of ancillary staff. The public health nurse in the Republic has a whole team of people doing her job in the UK, with health visitors for babies, the elderly, disabled people, etc. There seem to be a lot of meetings and a lot of bureaucracy.

The GP in the North can get out at 60 with a reasonable pension. They don’t seem to be as free as the GPs in the South to run their own affairs. Morale is low and nobody appears to want to practice in a rural area.

I met a GP friend of mine in the North one morning who was in a simmering rage because the carpet in her office was the wrong shade of blue, and not what she had told the practice manager she wanted.

In my world, you deal with the carpet people yourself, but you also pay for the carpet. If the computers crash, you try to get it sorted yourself. You are judge, jury and executioner. In the UK, you are part of a large machine. If the machine works well, and in the 1980s it was superb, then you are happy.

If it is ailing, then you are miserable.