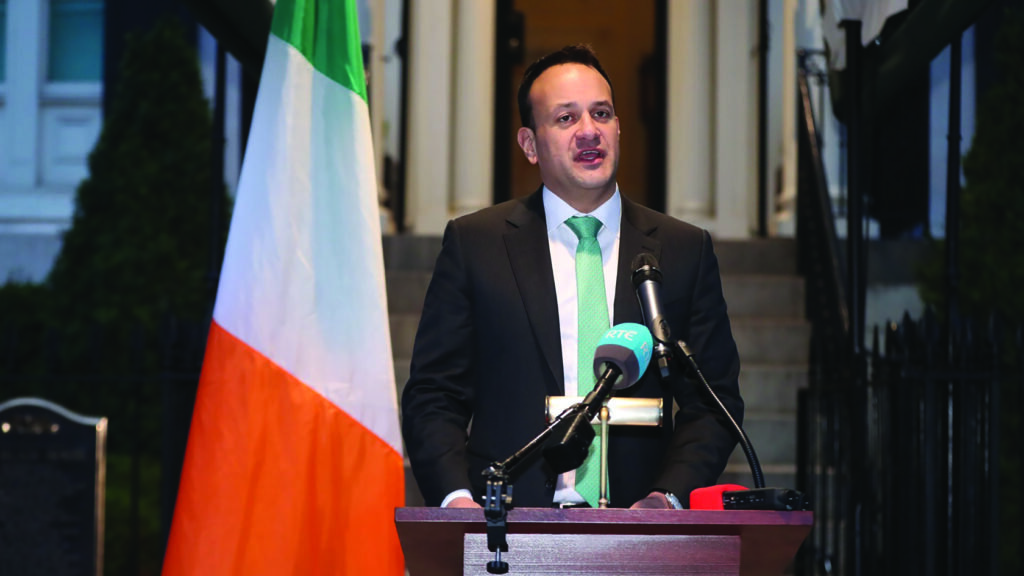 The Medical Independent charts the news and views from Irish healthcare in 2020, a year when the world depended on healthcare workers as never before

An unpreceded year starts with a new record for hospital overcrowding. Some 760 patients are waiting on hospital trolleys on 6 January. Taoiseach Leo Varadkar cites a “very severe” influenza season and shortage of hospital beds.

Reports emerge from Wuhan, China, of a mysterious ‘pneumonia outbreak’. On 11 January, Chinese researchers publish a draft genome of the new virus, which is initially known as ‘2019 novel coronavirus’.

Rural Independent TDs intend instigating a ‘no confidence’ motion in Minister for Health Simon Harris. However, within days, the Dáil is dissolved and a General Election scheduled for 8 February, with housing and health set to be among the key battlefields.

On 27 January, the first meeting of the national public health emergency team (NPHET) on the novel coronavirus is held at the Department of Health, chaired by Chief Medical Officer (CMO) Dr Tony Holohan.

On 30 January, the World Health Organisation (WHO) declares the spread of the virus as a public health emergency of international concern.

During the month, patient advocate Mr Mark Molloy resigns from the HSE board, describing “tokenistic” treatment of patient representatives and lack of investment in the national maternity strategy.

In an interview with the Medical Independent (MI) preceding General Election 2020, Minister Harris says: “I want to be very, very clear with GPs — we have a lot more I want to talk about.” Minister Harris also states he received Government approval before Christmas “to offer consultants a much higher rate of pay, one of the highest rates in the OECD, and the highest in the EU, in return for public-only contracts”.

Also speaking to MI, Fianna Fáil’s health spokesperson Deputy Stephen Donnelly (appointed as Minister for Health later in 2020) says consultant pay inequality needs to be addressed with “extreme urgency” and is driving a “chronic shortage” of consultants. The announcement of plans to extend GP care to under-13s “happened without any consultation with the GPs and without putting the resources in place”, according to Deputy Donnelly.

In the election, Fianna Fáil wins the most seats (38), one ahead of Sinn Féin (37). Fine Gael obtains 35 seats. A caretaker Government remains in place for months.

A HIQA report finds 15 of 19 maternity units are operating in substandard physical environments. On 29 February, the Health Protection Surveillance Centre (HPSC) announces the first confirmed case of Covid-19 in the Republic of Ireland. The case is associated with travel from Italy.

The second confirmed case is announced on 3 March – also associated with travel from Italy. At a HSE press briefing on 5 March, Specialist in Public Health Medicine Dr Sarah Doyle says the virus will be spreading in the community “within weeks”.

On 10 March, the HPSC confirms the first death of a person from Covid-19. On the same day, NPHET discusses visitor restrictions announced on 6 March by Nursing Homes Ireland. The meeting agrees restricting visitors is not required and the issue will be kept under review. Two days later, restrictions on visiting hospitals and long-term care settings are part of measures announced by Government upon NPHET’s advice.

Speaking from Washington DC on 12 March, Taoiseach Varadkar announces the closure of schools, colleges, and other public facilities from that evening.

In a further televised address on St Patrick’s Day, the Taoiseach says the disruption to everyday life could last into the summer. The sense of foreboding within the medical profession, as they steel themselves
for a potential surge of cases as has occurred in Italy, is reflected in columns published in MI.

In his column, ‘Fear is the mind-killer’, cardiologist Dr Paddy Barrett writes that healthcare professionals face a two-pronged battle – firstly to conquer the virus, and secondly to overcome their own fears. “The fear that those close to us may suffer and die,” he writes. “The fear that we will be called upon to make decisions of major consequence with little information to guide us.”

In ‘The power of hope’, GP Dr Lucia Gannon writes of the seismic changes in general practice as consultations move online and guidance and directives rapidly change.

“Lying awake at night, when all the unanswered questions threatened to overwhelm me, I turned to hope.   Hope emerges when times are tough.  It helps us overcome obstacles and forces us to put our resourcefulness into action,” writes Dr Gannon.

In ‘Pressing on and taking the fight to the virus’, paediatric radiologist Dr Gabrielle Colleran reflects on her niggling concern that she could become infected through the course of her duties. “Even though we are afraid for ourselves, we close our eyes, take a deep breath and push on to meet the challenge head on,” writes Dr Colleran.

On 24 March, the Government sets out additional restrictions including closure of all non-essential retail outlets. More measures are announced on 27 March including travel restricted to 2km. Cocooning is introduced for over-70s.

The IMO warns that patients with serious ailments and chronic illnesses may be avoiding presenting for care. MI reports that a number of GPs are in self-isolation, while others have tested positive for the virus.

On 31 March, 325 Covid-19 daily cases and 17 deaths are reported by the HPSC, bringing the total confirmed cases to 3,235 and deaths to 71. During the month, the HSE admits the availability of personal protective equipment (PPE) is “tight” in certain hospitals.

On 3 April the Irish Nurses and Midwives Organisation (INMO) writes to HSE Chief Clinical Officer Dr Colm Henry, urging routine surgical mask wearing by healthcare workers. Discussions on the matter continue at NPHET’s expert advisory group, with a majority voting in favour of the intervention on 10 April. The advice is endorsed by NPHET and comes into force on 22 April.

During the month, the HSE announces an increase in medical interns from 734 to approximately 1,100 this year. These students will finish medical school early to assist in the pandemic response.

On 25 April, RTÉ reports that 21 people have died from Covid-19 at one Dublin nursing home (St Mary’s Hospital, Phoenix Park) since the start of the month.

A roadmap to easing restrictions with five stages is adopted by Government. On 15 May, the Government confirms that phase one of ‘The Roadmap for Reopening Society and Business’ will commence on 18 May.

The Government confirms that “phase two plus” of easing restrictions will begin on 8 June. Under a reconfigured roadmap, there are two remaining phases to commence on 29 June and 20 July (phase four is later delayed until 10 August and then further postponed).

Minister Harris says face coverings will be mandatory on public transport with sanctions for non-compliance. The regulations come into effect on 13 July.

Fine Gael, Fianna Fáil and the Green Party enter a coalition and Micheál Martin is elected Taoiseach. Stephen Donnelly is the new Minister for Health.

CMO Dr Holohan announces he is stepping back from the role to spend time with family due to his wife’s serious illness. Dr Ronan Glynn is appointed as Acting CMO.

The HSE releases the Covid tracker contact tracing app. There are one million downloads within the first 48 hours of the app going live, according to the HSE.

On 22 July, the death is announced of Dr Syed Waqqar Ali Shah, a doctor working in Dublin for many years. He is the eighth healthcare worker in Ireland to die from Covid-19.

The Mater Misericordiae University Hospital, Dublin, where he worked and died, says Dr Waqqar provided “selfless emergency care” to Covid-19 patients at hospitals during the pandemic. The IHCA describes Dr Waqqar as “an exemplary medical professional with an immense dedication to public service”.

Dr Naveed Abbas, Surgical Registrar, writes a letter to MI in memory of the late Dr Waqqar. He pays tribute to Dr Waqqar and raises broader issues about the treatment of immigrant doctors in Ireland.

“A less-than-casual look at the training posts and numbers as well as the demography of the consultant cohort will be enough to delineate a clear pattern of bias against immigrant doctors,” writes Dr Abbas in his letter, which prompts an outpouring of support and commentary on social media.

As of 10 August, face coverings are mandatory in shops and other indoor public settings.

The ICGP welcomes the Government’s new document, ‘Resilience and Recovery 2020-2021 Plan for Living with Covid-19.’ But the College says GPs are concerned about the increase in cases and they urge the public to meet less people and reduce social contacts.

The IMO accuses the HSE and the Department of Health of “hypocrisy” for praising the expertise of public health specialists while denying them consultant status. The statement follows the latest in a series of meetings that began in 2019.

Dr Holohan returns to his position as CMO. An Oireachtas committee recommends an inquiry into nursing home deaths, including an examination of the “largescale discharge” of patients from acute hospitals to nursing homes in early March.

On 13 October, an extra €4 billion for the health service is announced in Budget 2021, to provide for Covid-19 testing, PPE, and action plan measures.
An additional 1,146 acute and 1,250 community beds are also promised. Adult critical care beds will rise to 321 by the end of 2021.

On 16 October NPHET recommends level five restrictions for six weeks. On 19 October, the Government agrees to move to level five from midnight 21 October until 1 December.

On 21 October the HPSC announces a daily figure of 1,066 confirmed cases of Covid-19. There are 313 patients hospitalised, including 37 in ICU. There were 20 hospitalisations in the previous 24 hours.

The IHCA warns that 150,000 fewer people were seen by cancer screening services in the first half of 2020. The Association says an extra 73 consultant oncologists are needed over the next eight years to address current oncology waiting lists and future demand.

On 27 November, the IMO announces its public health specialists and specialist registrars have voted overwhelmingly (94 per cent) for industrial action. The union later confirms plans for three days of strike action by public health doctors in January.

Dr Ina Kelly, Chair of the IMO’s public health doctors committee, says as a doctor who has committed her career to public health, she is “deeply distressed that it has come to this”.

Government departs from public health advice on opening the hospitality sector as it lifts level five. NPHET’s Prof Philip Nolan predicts Ireland could see up to 1,200 daily cases in January if public health measures are not followed.

On 21 December, the European Medicines Agency recommends granting a conditional marketing authorisation for the Pfizer-BioNTech vaccine.