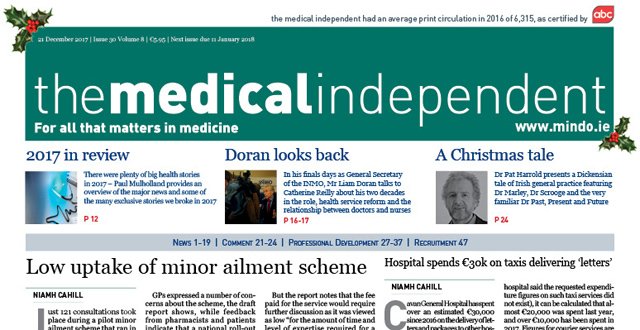 Unfortunately, the year began with familiar stories of overcrowd­ed emergency departments (EDs), with a record number of patients (612) on trolleys on the morning of 6 January. The Medical Inde­pendent (MI) reported on tense exchanges between the Irish Nurs­es and Midwives Organisation (IN­MO) and the IMO on the subject.

This month, the GP Committee of the IMO also warned that GP ser­vices across the country were “near breaking point” and that no new services could be extended to gen­eral practice unless additional re­sources were made available.

An RTÉ documentary, Living on the List, showed that the number of patients waiting for operations or medical procedures was signifi­cantly higher than the waiting lists published by the National Treat­ment Purchase Fund (NTPF). The ‘Pre-Admit’ and the ‘Pre-Planned’ lists were not included in the pub­lished NTPF data, despite compris­ing thousands of patients. The doc­umentary generated fierce contro­versy after it was broadcast, partic­ularly around children waiting for scoliosis procedures.

Meanwhile, MI revealed that sponsors of HSE leadership master­class were promised ‘face-time’ with a ‘HSE buyer’. The promise was re­tracted by the HSE following queries by this newspaper and a spokesper­son for the Executive said the origi­nal text had been put up in error.

This newspaper reported how the window of opportunity to prevent carbapenem-resistant Enterobac­teriaceae (CRE) from becoming en­demic in Ireland’s hospital system was “diminishing rapidly”. Presi­dent of the Irish Society of Clinical Microbiologists Dr Eleanor McNa­mara told MI that CRE represented a “major” patient safety issue, with a significant increase in the number of cases recorded between 2013 and 2016. Six months later, it would be declared a HSE public emergency.

In another exclusive, MI revealed details from an unpublished HSE policy document that stated capita­tion should constitute the majority of payments to GPs, marking a de­parture from the current GMS GP contract, where nearly 30 per cent of payments are non-capitation based. The document, compiled in 2014, stated GP benefits and practice sup­ports/input subsidies appeared to have “gradually built up over time, like barnacles on a boat”. Setting GP Fees for Under-Six Year-Olds in Ireland — Towards a Methodology was commissioned by the HSE and carried out by the ESRI and Trinity College Dublin.

The month began with Minister for Health Simon Harris welcom­ing the deferral of planned industri­al action by the INMO.

Also this month, Minister Harris announced that the Government had approved the investment re­quired to enable the National Paedi­atric Hospital Development Board to award the construction contracts for the building of the new Nation­al Children’s Hospital (NCH) on the St James’s Hospital campus and the two paediatric outpatients and urgent care centres on the Tallaght and Connolly Hospitals’ campuses.

Negotiations between the HSE and pharmaceutical company Ver­tex involving the commercial terms for the supply of Orkambi and Ka­lydeco to Irish cystic fibrosis (CF) patients concluded, resulting in a positive outcome for CF patients who had strongly campaigned for access to the drugs.

Front-page stories from MI in­cluded revelations that hospi­tals were hit with over €2 million in fines in the first nine months of 2016 for failing to abide by the max­imum NCHD 24-hour shift limit, and that the Department of Health spent €704,804 on external consul­tancy services in 2016.

At the end of this month, the Oi­reachtas Committee on the Future of Healthcare published Sláinte­care, its proposals for a 10-year strategy for healthcare and health policy in Ireland. It was the first time that cross-party consensus had been reached on a long-term model of healthcare.

It was also announced during the month that the new National Ma­ternity Hospital would have no in­volvement with the Religious Sisters of Charity. The order said it was to give up ownership of the St Vincent’s Healthcare Group (SVHG), after out­cry over ownership of the planned maternity hospital, which is to be built on the site owned by SVHG.

Meanwhile, the IHCA expressed its serious concern that an increas­ing number of temporary consultant posts are being filled by doctors who are not eligible to be on the Medical Council’s Specialist Register.

MI reported that the decision by the HSE to discontinue the Irish Hospital Redesign Programme (IHRP) and replace it with anoth­er initiative aiming to improve pa­tient flow was strongly criticised by those behind the programme for needless duplication. The final re­port of the IHRP was highly critical of the HSE’s actions and also stat­ed that the “political imperative for quick solutions” had resulted in de­clining support.

In an exclusive story, MI report­ed that the HSE has conducted 62 disciplinary investigations and dis­missed seven staff members since 2015, according to data released to this newspaper under Freedom of Information legislation.

A new record of almost 687,000 patients were waiting for treat­ment in public hospitals, accord­ing to NTPF figures released this month. The ‘shocking’ figures rep­resented an increase of nearly 9,500 on the previous month and were widely condemned.

The latest figures from the IN­MO confirmed a record number of patients (57,674) admitted for hos­pital care had to be put on trolleys in the first seven months of 2017. The Irish Association for Emergen­cy Medicine (IAEM) questioned the commitment of the Govern­ment and the HSE to addressing the problem of ED overcrowding following the release of the figures.

Also, MI told the story of how a Kerry GP defied an instruction from the National Cancer Control Pro­gramme (NCCP) to cease remov­ing suspicious skin lesions, assert­ing the procedures were often nec­essary due to “unacceptable” wait­ing times for patients in the local pigmented lesion hospital clinic in Cork. It also emerged that private health insurer LAYA had stopped covering the removal of suspect le­sions in primary care, though agree­ment was later reached, following agreement with the NCCP on set guidelines, to reinstate payment to GPs under a new code.

This month, MI also reported that over 20 HSE staff received pay­ments under its Assault at Work Scheme in a 20-month period, at a cost of approximately €1.6 million.

MI reported how a fire that oc­curred at the ICU in the Rotun­da Hospital, Dublin, earlier in the year, resulted in babies having to be moved and the unit being closed for seven days.

MI also reported that almost €4 million was spent by the HSE on chaplaincy services in 2015 and 2016 at public acute hospitals.

In another exclusive, this paper revealed that public displays of pre­served dead bodies would require a licence under proposed legislation. The Medical Council expressed concerns to the Department of Health regarding the ethics of the Real Bodies Exhi­bition, which was held in Dublin’s Ambassador Theatre, according to the report.

This month also saw the appoint­ment of Prof Donal O’Shea, Consult­ant Endocrinologist, as the Nation­al Clinical Lead for Obesity. Previ­ously tipped by MI for the role, Prof O’Shea will lead the implementation of national obesity policy.

Minister Harris announced that he was convening the National Pub­lic Health Emergency Team as a public health response to the CPE/ CRE superbug.

In this paper, it was revealed that Revenue’s probe into consultants tax affairs has yielded €61.9 million to date.

In another front-page exclusive, proceeds from the sale of the Med­ical Council’s former headquarters were revealed to have totalled €2.3 million, which was below the report­ed asking price of €2.75 million.

Also, MI reported how a num­ber of recommendations made in an Interim Report and Second In­terim Report of the Clinical Adviso­ry Group (CAG) on medical card el­igibility have yet to be acted upon by the HSE.

A story by MI that the Medical Council paid a “professional fee” of €23,079 to a former US astro­naut for an approximate 45-min­ute speech at its Patient Safety and Leadership Conference last year caused huge consternation among readers.

Also, MI revealed that an exter­nal report into health and safety at the Department of Health head­quarters at Hawkins House found “a large number of significant haz­ards” on each floor, including in the Minister for Health’s office.

This newspaper also revealed how the HSE was urged to declare a pub­lic health emergency in response to the spread of CPE almost a year be­fore the emergency was declared in September.

In response to an RTÉ Prime Time Investigates pro­gramme showing some consult­ants breaching their private prac­tice limits, the IMO and IHCA said most consultants work beyond their contracted hours in public hospitals treating patients.

Meanwhile, Minister Harris and the HSE insisted progress was be­ing made on hospital waiting lists, stating that for the third month in a row, the total numbers of pa­tients on the inpatient/day case list has fallen and NTPF initiatives had treated above the targeted number of patients. However, health unions blasted the ‘spin’ on very small re­ductions on the overall waiting list, which currently stands at 684,940.

In good news, the ICGP revealed that it had experienced a 50 per cent increase in the number of ap­plications for GP training places compared to last year.

Intensive care capacity in Irish public hospitals could not cur­rently accommodate a mass casu­alty incident, the Clinical Lead for the HSE Critical Care Programme outlined in an internal report sent to senior HSE managers and ob­tained by this newspaper.

MI also reported this month that the Department of Health has hired a consultancy firm at a cost of ap­proximately €180,000 to work on its response to the Sláintecare re­port. The entire work of the Oireach­tas Committee that drafted the re­port itself was just under €200,000.

Another MI story revealed how the HSE is reportedly paying three times the amount the UK NHS pays for curative hepatitis C drugs.

The unpopular name for the new NCH, Phoenix Children’s Health, meanwhile, came under more fire, with threats of being sued by a US hospital with the same name and acknowledgement from Minister Harris that a rethink was in order.